Some months back in Nigeria one naked and dying 2-year abandoned child was seen being fed by a lady charity-worker from Denmark – Anja Ringgren Loven, that pic went viral in social media. . She later adopted that child and named him “Hope”. 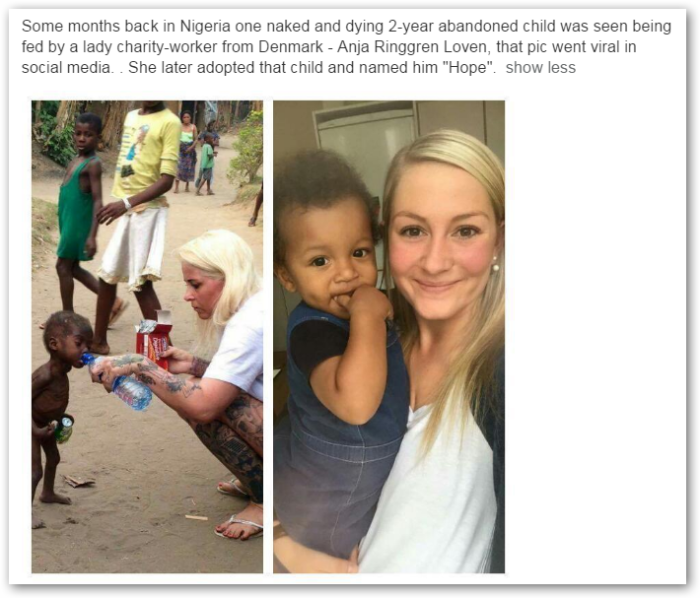 A two-year-old Nigerian boy who was found emaciated and riddled with worms after his family left him for dead has made an incredible recovery.

A picture of the starving toddler being given a sip of water by an aid worker broke hearts around the world when it was published in January.

The boy, now called Hope, was abandoned by his family because they thought he was a witch and was found in the streets by Anja Ringgren Loven, a Danish woman living in Africa, on January 31.

Back in January, Ms Loven found the boy after he spent eight months fending for himself and living off scraps.

She bent down and gently began feeding him and giving him water from a bottle. She then wrapped up the disorientated toddler in a blanket and took him to the nearest hospital for treatment.

When Hope reached the hospital, he was given medication to remove the worms from his stomach and daily blood transfusions to incorporate more red blood cells into his body, Ms Loven said.

And two days after the aid worker asked for the community’s help with Hope’s costly medical bills, she received $1million in donations from around the world.

Just eight weeks later, Hope is unrecognisable. He has gained weight and has been pictured smiling and playing with other children.

Ms Loven uploaded new photos of Hope on Saturday, and wrote: ‘As you can see on the pictures, Hope is really enjoying his life now having 35 new brothers and sisters who ALL take such good care of him, play with him, study with him, and make sure he is safe and is getting a lot of love.’

But she explained Hope has hypospadias, a genital birth defect meaning the urethra emerges somewhere on the shaft or even the base of the penis, instead of at the tip.

She added: ‘The doctors found this inborn condition on Hope, so next week Hope will have surgery.

‘This is an operation the doctors have performed many times, so Hope will be very fine.’

Ms Loven is the founder of African Children’s Aid Education and Development Foundation, which she created three years ago to help children who have been labelled witches and therefore neglected or even killed by the members of their community.

‘Thousands of children are being accused of being witches and we’ve both seen torture of children, dead children and frightened children,’ she wrote on Facebook, accompanying images of her feeding the young boy and appealing for donations to help pay for his medical bills in January.

‘With all the money, we can, besides giving Hope the very best treatment, now also build a doctor clinic on the new land and save many more children out of torture!’ she said.

Ms Loven runs a children’s centre where the youngsters she saves live and receives medical care, food and schooling.

She and her husband, David Emmanuel Umem, began building their own orphanage in late January.

“I was just shocked when I saw the image of Hope drinking anew close to Anja’s water bottle, and I immediately realized that I too must do something for the witchchildren,” explains Explosive moderator Elena Bruhn. The 38-year-old mother refers to the photo, which went around the world in early 2016. It shows the Danish development aid worker Anja Ringgren Lovén, who reaches from a bottle of water to a small, bare-baked, bare boy in a Nigerian village. A horrible picture with consequences.

“For two years, the boy was old and he was estimated to be living alone on the street for eight months. His parents thought he was a so-called” witch-kid, “possessed by demons, throwing him away like garbage. ” Anja Ringgren Lovén took the boy to the hospital and baptized him Hope. As a miracle, Hope survived and now lives healthy and happy in an orphanage for ill-treated children who Anja Ringgren Lovén and her organization “DINNødhjælp” opened three years ago.

In Nigeria, the most populous country in Africa (177 million inhabitants), Anja Ringgren Lovén in the Akwa Ibom region has been taking care of the so-called “Witnesses” since many of the communities in Nigeria have been stigmatized and abused. As a kind of exorcism some children are poured over with boiling water. If they do not die while the communities still believe the ritual has not helped, tormented. According to the latest UNICEF estimates, tens of thousands of children have been witches in African countries like Nigeria or the Gambia within a decade. The double mother Anja Ringgren Lovén founded an orphanage in Uyo three years ago, where she cares for about 40 abused children. There, not only the physical injuries of the children are treated medically, but a great deal of emphasis is placed on a well-founded school and education. The donations will be used to build a center in which the children will be trained musically and creatively, and will be prepared for their professional life.

Here is the video.