Skip to content
HomeRida Morwa:- Big Crash Coming Or Is It?

With the 10-year yield remaining stubbornly low at 1.5%, many investors believe that they are pointing to a recession (or deflation) next year, whereby we could see a big market crash.

However today, we are seeing a very interesting phenomenon, unseen in modern times. Inflation (as measured by U.S. Personal Consumption Expenditures) is running well above the 10-year Treasury yields, resulting in significant negative “real yields”! Take a look at this chart since the year 1990 (or for the past 31 years). 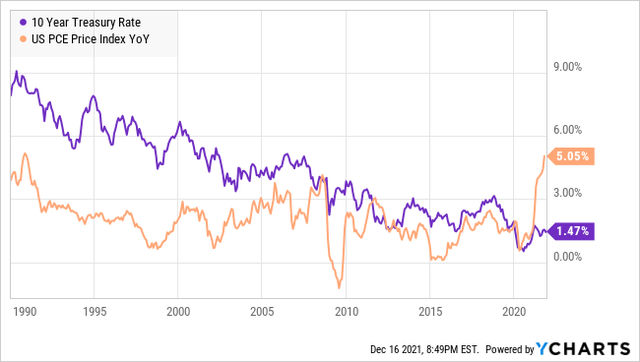 Well, inflation is so high and persistent that even Jay Powell stopped using the word “transient”, yet the 10-year Treasury yield is around 1.5%. This is confusing many investors who are asking themselves:

This is a very interesting phenomenon, that we have only seen 3 times in the past 120 years in the United States:

Treasury yields always tell the right story, but it is people that misinterpret them.

A Dig Through History

When we think of high inflation, most of us jump right to the 1970s when higher inflation led to higher treasury yields, and treasuries almost always had a higher yield than inflation.

No, it has not – if we dig into history: 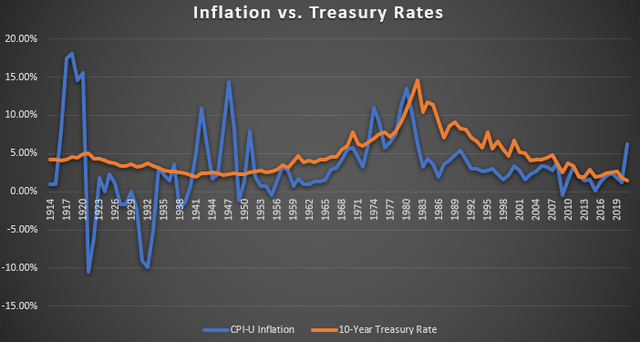 So what is the common denominator in WWI, WWII, and Today?

So it is no wonder that Treasury yields refuse to go higher than they are today! In fact, what treasuries are telling us is exactly what I have been saying over the past several months:

How Did the Markets Fare During Similar Periods: WWI and WWII

For us investors, it is important to not only be aware of what is happening in today’s macro-economic situation but to also understand what the likely outcome will be for equities. In this case, we have to go back to the periods of WWI and WWII and see how equities fared during times of very high inflation and very low Treasury yields:

Inflation started picking up significantly in 1917 when the U.S. formally got involved in WWI. Inflation surged up to 18% while the 10-year Treasury rate remained at 4.5%. Inflation remained high through 1919.

Despite an initial selloff in late 1917, we saw a great Bull Market that ran through 1918 and 1919 and the Dow Jones Industrial Average hit all-time highs. The Bull Market ran up 80% over the course of two years. 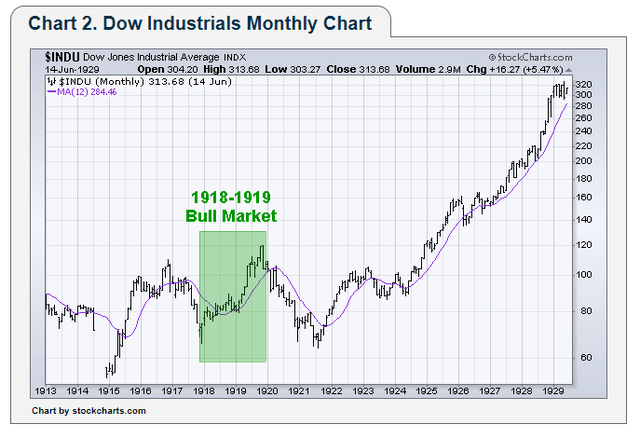 The party came to an abrupt end in 1920 when inflation suddenly became deflation. A few of the most relevant factors impacting the recession in 1920 were: 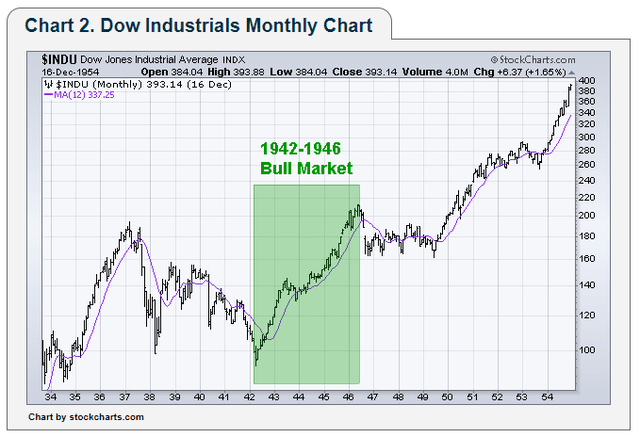 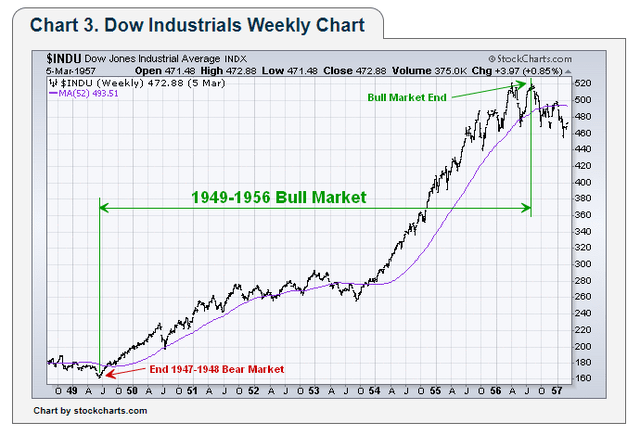 The combination of high inflation and low Treasury Rates proved very beneficial for equity holders. The period was characterized by low unemployment (below 5% from 1942 on) and economic growth as the U.S. economy ran hot in the wake of WWII.

As recently as June, the Federal Reserve was projecting a PCE inflation rate of 3.4% for 2021. Three months later it hiked that projection up to 4.2% for 2021. One month after their meeting, PCE inflation was 5%.

Earlier this year, I highlighted what I termed as “The Great Inflation Lie“. Either the Federal Reserve is incompetent with projections that aren’t even in the ballpark of reality, or it is intentionally being misleading. When random average Joes are being surveyed and are more accurate than the Federal Reserve with their projections, something is wrong. 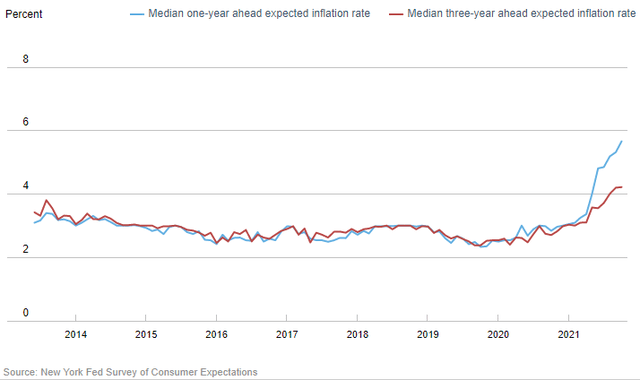 I do not believe the Federal Reserve is that incompetent, that they failed to see what everyone else in the country could see.

So why do both Government and the Fed want inflation to run very high?

The U.S. Government has run up a ton of debt. As a percentage of GDP, the Federal debt is now over 120%.

The cost of COVID alone was several times higher than the cost of WWII in today’s dollar terms. 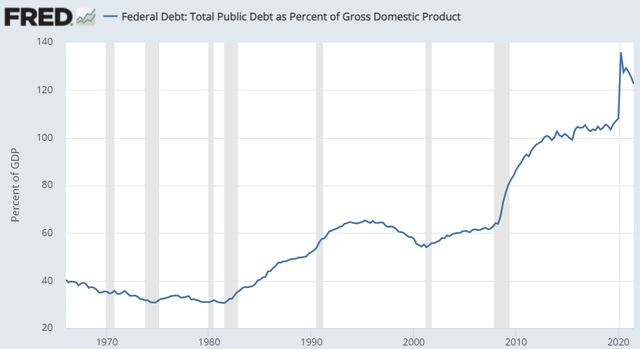 The U.S. never “paid” for WWII – it refinanced the debt, and through inflation, the significance of the debt dissipated quickly, even as the total debt grew. 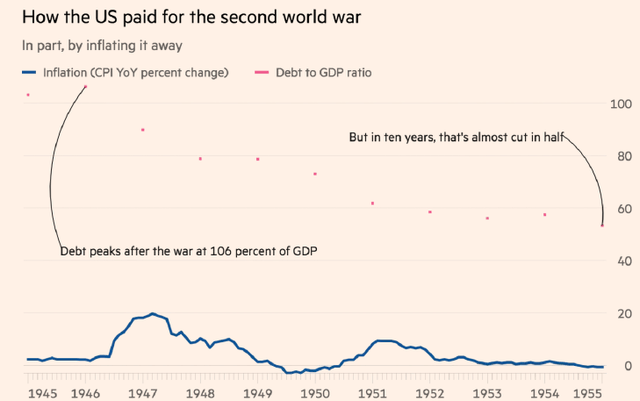 A significant amount of inflation is the only solution that the U.S. Government has to manage its debts and obligations.

With debt levels far beyond the pale of productivity levels (i.e., embarrassing debt to GDP ratios), the U.S. and other developed economies are mathematically and factually unable to ever grow their way out of the debt hole they have been digging us into for years.

It is too late to fix all the past mismanagement. It is also impossible to force new generations to pay for debt accumulated by the older ones by taxing them to death and forcing them to be productive in the labor force well above the age of 75. Not only will it result in political unrest, but there are simply not enough young people to tax due to an aging population, and a wave of baby boomers retiring soon.

The only way to deal with this black hole is through inflation.

Don’t be fooled by Fed Chair Powell’s hawkish talk. After all, he has a hearing to keep his job coming up in January. Treasury yields are NOT pointing to a recession and/or deflation. They are telling us that liquidity will remain high and that the treasury market is not buying the hawkish story the Fed is selling.

We are seeing dynamics that the stock market has not witnessed for over 70 years. The inflation rate will remain above the 10-year Treasury rate for a sustained period of time, creating an environment of high inflation and relatively low-interest rates. Historically, this dynamic has been very beneficial for equity markets!

Right now, it is a fantastic time to be an investor and the worst time to be sitting on cash. Investors want to be exposed to equities that benefit from high inflation, while also benefiting from low treasury yields.

My strategy includes investing in:

I am looking forward to the year 2022 being a very strong year for equities. I am personally keeping as little cash as possible in my investment account, taking out what I need, and redeploying the rest of my dividends into income investments. The last thing anybody wants is a 6.8% inflation eroding the purchasing power of their hard-earned savings. Being invested in the right stocks which offer both high yield and growth helps you not only to protect your principal but also increase your net worth in today’s difficult environment.

It is critical that investors are aware of the major macroeconomic forces at play that are impacting the markets so that they can make informed decisions. I write “Market Outlooks”, similar to the above which I share every Sunday with members of my investment community, to keep the focus on the big picture as it evolves. This helps us make adjustments to our portfolio as needed, in a planned and methodical manner.