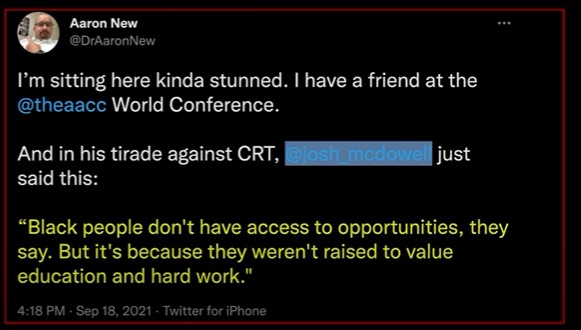 “Black People don’t have access to opportunities, they say.
But, it’s because they weren’t raised to value education and hard work”

Josh McDowell Is Stepping Back From Ministry After Making Racist Comments About Black Families
BY TYLER HUCKABEE
SEPTEMBER 24, 2021

Bestselling Christian author and speaker Josh McDowell has apologized following comments he made about Black Americans and other racial minorities, saying they were not raised to appreciate things like hard work and education. He also disparaged the idea of systemic racism and Critical Race Theory, which he described as an “epidemic” facing younger generations.

On Wednesday, McDowell apologized after an outcry, saying he “made comments about race, the Black family and minorities that were wrong and hurt many people.” He also announced he would be “stepping back” from his ministry for a “season of listening.”

Last weekend, McDowell — best known as the author of Evidence That Demands a Verdict — spoke at a meeting of the American Association of Christian Counselors where he described the “Five Greatest Global Epidemics.” Notably, the talk did not address the literal epidemic facing the globe right now, but did spotlight things like Social Justice and Critical Race Theory, the latter of which he said: “negates all the biblical teaching.”

“There’s no comparison to what is known today as social justice with what the Bible speaks of as justice,” he said. “With CRT they speak structurally. The Bible speaks individually. Make sure you get that. That’s a big difference.”

McDowell then admits that he agrees that not everyone in the U.S. has the same opportunities as he’s had, but takes a decidedly novel track with it: “I do not believe Blacks, African Americans, and many other minorities have equal opportunity. Why? Most of them grew up in families where there is not a big emphasis on education, security — you can do anything you want. You can change the world. If you work hard, you will make it. So many African Americans don’t have those privileges like I was brought up with.”