Fair Use as a matter of Law

Consistent with his questioning during oral argument, in a 6-2 opinion, Justice Breyer held that “where Google reimplemented a user interface, taking only what was needed to allow users to put their accrued talents to work in a new and transformative program, Google’s copying of the Sun Java API was a fair use of that material as a matter of law” — “assum[ing], for argument’s sake, that the material was copyrightable.”  Justice Breyer explained the decision to decide on fair use rather than copyright protection by stating that: “Given the rapidly changing technological, economic, and business-related circumstances, we believe we should not answer more than is necessary to resolve the parties’ dispute.”

Justice Breyer discussed the purpose of copyright protection and its limitations, including the fair use doctrine, quoting the Court’s previous statements on this “equitable rule of reason” that “permits courts to avoid rigid application of the copyright statute when, on occasion, it would stifle the very creativity which that law is designed to foster.”  Justice Breyer added that “the application of [fair use] requires judicial balancing, depending upon relevant circumstances, including ‘significant changes in technology.’”  The majority’s opinion also acknowledged important competitive concerns, stating that fair use “can carry out its basic purpose of providing a context-based check that can help to keep a copyright monopoly within its lawful bounds.”

As is common in copyright cases (and as we saw during oral argument), the Court relied on a number of analogies: gas pedals in a car, QWERTY keyboards on a typewriter, the Dewey Decimal System for categorizing books, a travel guide that arranges a city’s attractions into different categories, language, file cabinets and drawers, robot chefs.  Metaphors or analogies often serve to make complex technological questions more accessible, but they can also misdirect, as occurred in the Federal Circuit, where the court accepted the implausible contention that functional declaring code was equivalent to J.K. Rowling’s Harry Potter novels.  In fact, the concept of “intellectual property” is itself an (imperfect) analogy to facilitate understanding of certain regulatory choices governments use to promote technological and artistic endeavors.  As today’s decision makes clear, those government-granted entitlements must be limited “to ensure that a copyright holder’s monopoly does not harm the public interest.”

Justice Breyer explained that the “declaring code” simply performed “an organizational function”, much like the Dewey Decimal System would organize books or a travel guide would organize tourist attractions.

Telling readers that fair use is a judge-made concept that should remain flexible, Breyer wrote, “courts must apply it in light of the sometimes conflicting aims of copyright law, and that its application may well vary depending upon the context.”

“Thus, copyright’s protection may be stronger where the copyrighted material is fiction, not fact,” he continued, “where it consists of a motion picture rather than a news broadcast, or where it serves an artistic rather than a utilitarian function.”

As is typical for computer programs, noted Breyer, Google’s use of Oracle’s code was far more function than form. “Generically speaking,” he explained, “computer programs differ from books, films, and many other ‘literary work’ in that such programs almost always serve functional purposes.”

As a result, Breyer said, “applying copyright law to computer programs is like assembling a jigsaw puzzle whose pieces do not quite fit.”

Moreover, Breyer stressed, allowing Google to use the lines of code for its own purposes furthers general objectives of technological progress. He wrote:

Here Google’s use of the Sun Java API seeks to create new products. It seeks to expand the use and usefulness of Android-based smartphones. Its new product offers programmers a highly creative and innovative tool for a smartphone environment. To the extent that Google used parts of the Sun Java API to create a new platform that could be readily used by programmers, its use was consistent with that creative “progress” that is the basic constitutional objective of copyright itself. 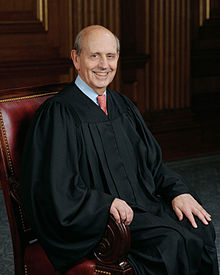 Stephen Gerald Breyer (/ˈbraɪ.ər/ BRY-ər; born August 15, 1938) is an American lawyer, jurist, and legal scholar who serves as an associate justice of the Supreme Court of the United States. He was nominated by President Bill Clinton on May 17, 1994, and has served since August 3, 1994.

After attending Stanford University, Breyer attended the University of Oxford as a Marshall Scholar and then studied law at Harvard Law School. After a clerkship with Supreme Court Associate Justice Arthur Goldberg in 1964, Breyer became well known as a law professor and lecturer at Harvard Law School, starting in 1967. There he specialized in administrative law, writing a number of influential textbooks that remain in use today. He held other prominent positions before being nominated for the Supreme Court, including special assistant to the United States Assistant Attorney General for Antitrust and assistant special prosecutor on the Watergate Special Prosecution Force in 1973. He also served on the First Circuit Court of Appeals from 1980 to 1994.

In his 2005 book Active Liberty, Breyer made his first attempt to systematically communicate his views on legal theory, arguing that the judiciary should seek to resolve issues in a manner that encourages popular participation in governmental decisions. The last Clinton nominee active on the court, he is generally associated with the Supreme Court’s more liberal side.

Breyer was born on August 15, 1938, in San Francisco, California, the son of Anne A. (née Roberts) and Irving Gerald Breyer, and raised in a middle-class Jewish family. Irving Breyer was legal counsel for the San Francisco Board of Education. Stephen Breyer and his younger brother, Charles, a federal district judge, are both Eagle Scouts of San Francisco’s Troop 14.

Breyer’s paternal great-grandfather emigrated from Romania to the United States, settling in Cleveland, where Breyer’s grandfather was born.  Breyer graduated from Lowell High School in 1955. At Lowell, he was a member of the Lowell Forensic Society and debated regularly in high school tournaments, including against future California governor Jerry Brown and future Harvard Law School professor Laurence Tribe.

Breyer spent 8 years in the United States Army Reserve including 6 months on active duty in the Army Strategic Intelligence. He reached the rank of corporal and was honorably discharged in 1965.

In 1967, Breyer married Joanna Freda Hare, a psychologist and member of the British aristocracy, the youngest daughter of John Hare, 1st Viscount Blakenham. They have three adult children: Chloe, an Episcopal priest and author of The Close; Nell; and Michael.

Breyer’s pragmatic approach to the law “will tend to make the law more sensible”, according to Cass Sunstein, who added that Breyer’s “attack on originalism is powerful and convincing”. In 2006, Breyer said that in assessing a law’s constitutionality, while some of his colleagues “emphasize language, a more literal reading of the [Constitution’s] text, history and tradition”, he looks more closely to the “purpose and consequences”.

Breyer has consistently voted in favor of abortion rights, one of the most controversial areas of the Supreme Court’s docket. He has also defended the Court’s use of foreign law and international law as persuasive (but not binding) authority in its decisions.

Breyer is also recognized to be deferential to the interests of law enforcement and to legislative judgments in the Court’s First Amendment rulings. He has demonstrated a consistent pattern of deference to Congress, voting to overturn congressional legislation at a lower rate than any other Justice since 1994.

Breyer’s extensive experience in administrative law is accompanied by his staunch defense of the Federal Sentencing Guidelines. Breyer rejects the strict interpretation of the Sixth Amendment espoused by Justice Scalia that all facts necessary to criminal punishment must be submitted to a jury and proved beyond a reasonable doubt. In many other areas on the Court, too, Breyer’s pragmatism was considered the intellectual counterweight to Scalia’s textualist philosophy.

In describing his interpretive philosophy, Breyer has sometimes noted his use of six interpretive tools: text, history, tradition, precedent, the purpose of a statute, and the consequences of competing interpretations. He has noted that only the last two differentiate him from textualists such as Scalia. Breyer argues that these sources are necessary, however, and in the former case (purpose), can, in fact, provide greater objectivity in legal interpretation than looking merely at what is often ambiguous statutory text. With the latter (consequences), Breyer argues that considering the impact of legal interpretations is a further way of ensuring consistency with a law’s intended purpose.

Court clerks described him as the “most effective emissary to the Court’s right-wing”.

In an interview on Fox News Sunday on December 12, 2010, Breyer said that based on the values and the historical record, the Founding Fathers of the United States never intended guns to go unregulated and that history supports his and the other dissenters’ views in District of Columbia v. Heller. He summarized:

We’re acting as judges. If we’re going to decide everything on the basis of history—by the way, what is the scope of the right to keep and bear arms? Machine guns? Torpedoes? Handguns? Are you a sportsman? Do you like to shoot pistols at targets? Well, get on the subway and go to Maryland. There is no problem, I don’t think, for anyone who really wants to have a gun.

In the wake of the controversy over Justice Samuel Alito’s reaction to President Barack Obama’s criticism of the Court’s Citizens United v. FEC ruling in his 2010 State of the Union Address, Breyer said he would continue to attend the address: