A couple of weeks ago, one of my dearest friends Apple’s laptop crashed on her.  We tried bringing it back up, but in the middle of trying an OS re-install found out that we had misplaced the CD\DVDs that came with the computer.

To make matters more punishing we had problems getting online and re-installing over the Internet.  I do not think it is Apple’s fault per se, as it appears to be more Comcast’s as she lost her service for an extended period.

Nevertheless, because of the silly errors we are getting I suggested that may be the hard-drive had crashed as a worst case scenario.

Always be careful as to what you say to a lady who has will and money, as she took the laptop to Fry’s and she was nicely fitted with a new hard-drive.

With a new hard-drive, our local Apple Store installed a replacement OS for her.  Cost free, I must say.  Not sure, if it goes that away for every one, but for pretty it goes.

And, as it has been a busy last couple of weeks for me, I only got back to her in the middle of last week.  She pleasurably recounted her good fortune and progress to me.

All she needed now was to re-install a couple of Application Software.

Thankfully, the vendors have the replacement software online and yours truly was able to download them.

Not quite smart, but I had the feeling that it might be best to burn the software using a burner utility that understands that DMG files are special install files.

If on Mac, it will probably be more straightforward.

But, unfortunately my loaner’s MAC went back with that old job and company.

So goggled for how to burn DMG files on a Windows box.

PowerISO to the rescue

PowerISO came up along with a couple of other tools. Tried the rest, but they did not recognize DMG file types.

Downloaded and installed a trial version of PowerISO.

Usage of PowerISO is standard.  Choose the file you want to burn and your burning drive.

Please keep in mind that on a box running UAC or MS Windows 2012 and later, you might have to initiate PowerISO as an Administrator.

PowerISO is not freeware

PowerISO is a commercial product and you are likely to occasionally get reminders to purchase it.  It is cheap enough at $29 or so. 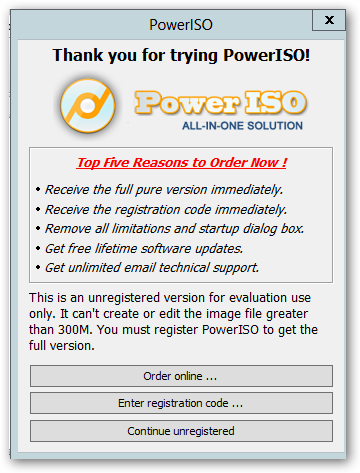 Invited the old lady out on a date night. And, she accepted and drove down to take us out.

But, alas I have yet to live up to a promise when a quick computer task stood in the way.

So most of last Friday’s evening was spent installing software and crashing a single lady’s otherwise quiet family night.

Ravi Zachrias : Walking from East to West: God in the Shadows

“We count many costs in the Christian Life, and God in his way prepare us for them all.  Still, the heart is never fully ready to face a significant loss”